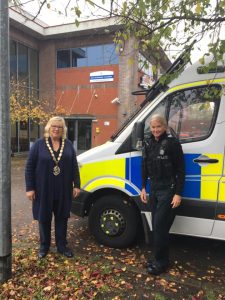 I spent an interesting morning recently talking to Sergeant Rachel Clark and new Beat Manager in the Rural Team, PC Toni Lines, about the work they do and about what’s going on in Frome. Rachel is one of Frome’s popular characters, well known for her amazing fundraising work with WHY as well as for her police work.

One of the most crucial things she wants to emphasise is how important it is to report every single incident, no matter how small. Every time someone phones in to the police with a concern, it can be charted by them so that if there are particular types of behaviour being reported or if a particular area is being targeted, they can clearly see the patterns and request extra resources to manage it.

Please don’t ever think you’re wasting police time and please don’t ever think they’re not interested. Frome’s Neighbourhood Policing Team is passionate about keeping people safe and are keen to stress that they’re always approachable. I’ve often seen videos on Facebook of thieves in action that have been captured on CCTV, calling for information from the public. That’s great, but please remember to also tell the police.

You can report any crime by calling 101, or by talking to the Clerk at the police desk within Frome Library, or by visiting the Avon & Somerset website https://www.avonandsomerset.police.uk/

The following contains up-to-date reports on activity in and around Frome from Sergeant Rachel Clark, and Chief Inspector Sharon Baker, Mendip & South Somerset and a clear explanation of exactly when to use 101 rather than 999.

Frome Neighbourhood Policing Team (NPT) receive a number of reports regarding people drinking Alcohol in Frome Town Centre. We remain committed to dealing with such reports. As a result of the reports received, we have taken a proactive approach to deal with these issues. We have increased patrols in the area and continue to engage and educate individuals located. The town centre is covered by a Public Spaces Protection Order which means a person in a restricted area who fails to stop consuming intoxicating substances when directed by an authorised person or who fails to surrender intoxicating substances in their possession to an authorised person commits an offence.

Numerous S.34 Dispersal Orders have been put in place in recent weeks, as a result of which two people have been arrested and are due their day in court. Frome Neighbourhood Policing Teams have also been conducting joint patrols with enforcement officers from Mendip District Council, who can also enforce the PSPO. Alongside this Frome NPT have engaged with numerous businesses in the town centre explaining what to do if they witness any Anti-Social Behaviour, and we are also working with local supermarkets in order to combat the street drinking issue. We continue to encourage members of the public to continue to report incidents of Anti-social behaviour in the area via 101 or online via the force website.

Frome NPT have received numerous reports of vehicle’s driving Anti Socially in the Market Place, Cork Street, Waterloo, Henley Way, and Cheese and Grain areas of the town. We remain committed to dealing with instances of Anti-Social behaviour and as a result of the reports we have taken a proactive approach to the issue, we have enhanced our patrols in the area and continue to engage and educate individuals in these areas.

We have handed out ASB diaries to residents of Henley Way, Frome, so we can obtain patterns of behaviour in order to conduct targeted patrols in the area. Vehicular anti-Social behaviour can be dealt with by way of a Section 59 Police Reform Act 2002 Warning which can lead to seizure of vehicles. Again, we encourage members of the public to continue to report incidents of Anti-Social behaviour in the area via 101 or online via the Force Website.

In the early hours of Wednesday 30th September (around 4am) there was an arson attack on a vehicle in Castle Street, Frome. House to house and CCTV enquiries have been conducted by Officers in and around the location and hi-visibility patrols will continue to form part of our response to this incident. Frome NPT continue to deliver reassurance in the area by way of strategic placement of the community contact vehicle which has been deployed numerous times following the incident. Crime stoppers have been informed and have got funding for 5 days of FaceBook campaigning through their own Crime stoppers Facebook page. Crime stoppers are also running a campaign which offers up to a £1000 reward for any information that leads to the identification of a perpetrator. We ask members of the community to continue to remain vigilant and report any suspicious activity that you witness in and around the area. My team are working around the clock to ensure reassurance is provided in the area. Our activity around this problem will not cease until the problem stops, I can assure you. Our difficulty does surround resources, the fires are very, very sporadic, sometimes months in between and always in the early hours when our resources are at their lowest. I have just secured some Police funding for a deployable camera and we are working towards this being sorted as soon as possible. We are urging anyone with any info to come forward. We are also addressing the schools and the YMCA in the chance that someone’s brother, sister, relative knows something.

We are continuing to investigate a suspected affray in Frome that happened on Monday 5th October. We were called at approximately 4.45pm to reports of a man in possession of a machete at a property in Marston Lane. A suspected imitation firearm was also reportedly seen. A man in his 30s suffered minor injuries. He did not require hospital treatment. Armed officers attended the property, but the man had left before they arrived. The police helicopter was used to assist with a subsequent area search, which proved negative. Although our investigation is at an early stage, we believe this to be an isolated incident involving individuals known to each other. There is no evidence at this stage to suggest a wider risk to the public. Efforts to find the offender are ongoing and enquiries are continuing.

Following a temporary stoppage caused by the COVID-19 pandemic CSW has restarted in the town. Our co-ordinator continues to deliver sessions at the following locations:

Our CSW coordinator continues to appeal for volunteers for CSW and is in the process of creating a new scheme at the Clink Road, Frome. Frome NPT actively engage with CSW and join them on their sessions where appropriate. More information about Community Speed watch is available on the Avon and Somerset Police Website: https://www.avonandsomerset.police.uk/apply/community-speedwatch/

Frome NPT continues to evolve and as such we have had some comings and goings from the team. PC John Gould has retired from the service after a sterling 25 years serving the communities of London and Frome. Inspector Julie Denny has also taken over the reins of the team replacing Inspector Mark Nicholson who moves to a new role in Weston Super Mare. PC Vittoria Radaelli has also joined the team, Vittoria is new to the force and is Frome’s first Police Now candidate (direct entry graduate).

There are numerous ways to follow and contact the team. Our force website has a dedicated section for Frome Town which contains information about the beat, the members of the team, and has a contact form should you have any issues you would like to raise. The beat page can be accessed using the following link: https://www.avonandsomerset.police.uk/your-area/frome-town/

The team also uses social media, we have profiles on both Facebook (PCSO Russell Ford) and Twitter: (@ASPMendip). We use these profiles to connect with the community. During the Pandemic we have introduced Facebook Live beat surgeries, something which we will continue to deliver in the future. Again, following a break due to the COVID-19 Pandemic, we have once again started to hold face to face beat surgeries. These have primarily been held in the Police Post, Frome, or the Community Contact vehicle, which is a vehicle (ford transit van) that can be used by all teams across the Mendips to engage and interact with people in different locations. All Beat surgeries are advertised across our social media platforms.

Your local Neighbourhood Teams took part in a week of action to increase awareness and disrupt County Lines in our area. (In the United Kingdom, county lines drug trafficking is the practice of trafficking drugs into rural areas and smaller towns, away from major cities. Traffickers recruit vulnerable children, including children in pupil referral units who have been excluded from school, as drug dealers.)

The following is a local flavour of what we did in Mendip and South Somerset;

Additionally, I am pleased to say that we successfully bid for extra funding for our area from the Government Surge Funding, aimed at helping us tackle Serious Violence.   This will mean additional pro-active activity in the coming months, a new mobile CCTV camera for the Mendip area, Youth Outreach in Yeovil, and additional funds to focus on getting more civil orders and injunctions on those causing us most harm.

As things go, we are still a friendly, community-minded and safe town but we need to keep it that way.  Please remember the crucial message from this report that if we see or hear anything of concern, we need to report it!  That way, we’ll all be helping to keep Frome safe! Thank you and stay safe!