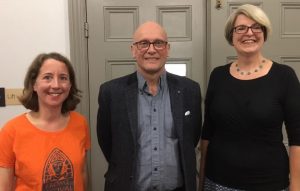 As the Deputy Chair of Town Matters, Councillor Jean Boulton welcomed everyone to the meeting, which began with an update and discussion around Somerset County Council and the recent cuts to major services. It was mentioned that Frome Town Council works hard for the local community and this would be even more important in the future.

Martin, Dara and Gail from Frome Festival then gave an update on the support they receive from Frome Town Council and how it has helped to boost volunteer numbers, reach out to new parts of the community and broaden the festival’s offer.  They explained that last year’s Festival which took place over 10 days, was full of variety and diversity, with 116 ticketed events, 61 free events, 12 free exhibitions, 47 venues taking part and drawing in 12,000 visitors. The event catered for art lovers, bibliophiles, foodies, photography buffs, walkers, fans of fashion, music and comedy, lots for children and opportunities for people who wanted to try their hand at something new such as bee keeping and bronze casting.

After thanking Frome Town Council for the invaluable support which enables them to plan ahead and budget effectively, they ended by explaining that planning for next year was already underway with lots of ideas on how to boost visitors’ numbers further. Frome Town Council expressed that the Festival was something that Frome was very proud of. You can read the report here.

Frome Carnival, were unable to make the meeting and so the recommendations from the Grants Advisory Panel were next. Community Projects Officer, Kate Hellard, explained that the panel had considered 11 applications in this second grant window, totalling £12,236. Nine community groups had their applications approved totalling £5,236. Find out more about the latest grant round here.

Next was Peter Macfadyen’s turn to present the background to the draft by-law on the Rights for River Frome and Rodden Meadow. He began by explaining that it has been two years since this was originally discussed as something the Council would like to take forward and explore. In that time there has been an online consultation with 98% of responders agreeing it was a good idea, although he highlighted an objection of it being a gesture and not something that will really make a difference.

Discussion followed about the potential outcome such as giving the town more control of the local environment and increasing environment protection in the areas we care about. It was unanimously agreed that with no risk or cost to the Council it should be further progressed by sending the draft by-law to DCLG. Take a look at the report here. There was an update on the Health and Wellbeing programme, with Manager Nicola Cretney being thanked for her work. You can read the report here.

Finally, it was time to consider the Community Engagement Strategy. Cllr Toby Eliot felt that it could be a bit more ambitious and it was decided it should be revisited at a future meeting.

The details of everything mentioned above can be found at www.frometowncouncil.gov.uk and the next Town Matters meeting is taking place at 7pm on 6 February at Frome Town Hall. Follow us on Facebook, Twitter and Instagram to keep updated on everything we’re up to.

Published
15 November 2018
Last Updated
19 January 2021
Published in
News
Previous
Are you a local business worried about tax?
Next
Stay safe in your workplace
Report
Report an accessibility problem