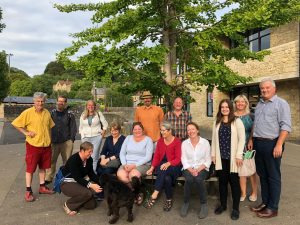 This month Council Matters went on tour, as we began the meeting with a trip around Welshmill and the Otherside to give people an idea of how Frome Town Council is managing these green spaces and what is planned for the future. Watch the highlights of the tour here.

The rest of the meeting took place at Frome Library and as usual began with a welcome from Councillor Shelia Gore. She gave a quick update on an action from the last meeting about stray balls from the Multi Use Games Area at Mary Baily ending up in the Bowls Club. It has now been agreed to raise the net of the MUGGA with a slight sloping roof to ensure balls roll back down into the games area.

Marketing Manager, Rachel Griffin also shared that the Change of Use Permissions for the Town Hall continue to move forward. The acoustic report has been accepted and air conditioning has now been installed in the Council Chamber. Wedding and Alcohol Licenses will be signed off once safeguarding policies have been agreed with the police and the Wedding License moves forward. She also reported that the damaged wall in the car has now been repaired and the London Plane tree next to it that had been pollarded has grown back looking as beautiful as ever.

The meeting then moved on to questions and comments from the public and councillors. Subjects ranged from Pat Tayler asking for a bus shelter nearby the Waterloo bus park, to a reminder that at the meeting in June Cllr Tom Killen (Deputy Leader of MDC) agreed that work demolishing redundant toilet blocks would begin within a matter of weeks, ending with County Cllr John Clarke urging people to publicise the fact that Somerset County Council is due to make a further £13m worth of cuts this financial year which he feels will affect vulnerable people. Cllr Toby Eliot suggested that people should write to the MP demanding more resources for SCC as them going into administration would benefit no one.

Next it was time to consider the current and proposed management plans (including risk assessments) for Welshmilll, the Otherside and North Parade. All plans were agreed and you can see the detail behind them here.

Financial Administrator, Hannah Paniccia then gave an update on Frome Town Council’s financial situation and that the external auditors had no matters arising for the latest Annual Return. Sheila also introduced and welcomed Sarah Williams who has joined FTC as the new Business Manager and will oversee finance and HR. You can read the full report here.

Finally, as part of becoming GDPR compliant the Councillors approved some further additions to the Privacy Policy which can be found here. The update on health and safety matters, risk management and staff training report was also noted which you can read here.

The details of everything mentioned above can be found at www.frometowncouncil.gov.uk and the next Council Matters meeting is taking place on 31st October where we’ll be back at the Town Hall. Follow us on Facebook, Twitter and Instagram to keep updated on everything we’re up to.