All aboard! The guys from Frome Men’s shed will be making an appearance at the Cheese show next weekend – showcasing their handmade, oar powered floatation device – the almighty coracle.

It was made for a race which took place in July – after the Welsh Men’s Sheds Association threw down the gauntlet late last year. 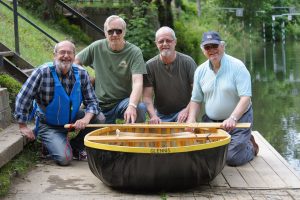 The Frome Shed coracle was made by shedders Tony Hopkins & Steve Gray from of strips of plywood bent into shape after soaking for over a week. The underside was covered in calico cloth and lastly coated in layers of heavy bitumen paint to seal it. It may sound simple, but it was a labour of love. On completion, the Shedders came to a decision it should be named Glennis, after Tony’s late wife.

It may look small and humble, but it holds its own on the river. Don’t take our word for it, come along and see for yourself. You’ll also get a chance to see them  making a second coracle, demonstrating the same traditional methods, only this time with wicker. 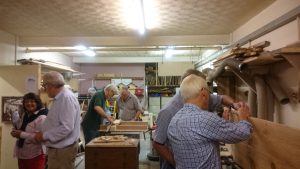 What is Frome Men’s Shed all about? On the surface it’s a workshop, decked out with tools and materials and open on Thursday mornings to anyone who wants to attend. It’s an organisation which began in Australia and is strives to alleviate social isolation. So far so good – the first UK Men’s shed was set up in 2009 and they are now all over the country. You may have seen the bird boxes the guys have made for some of Frome’s parks, or perhaps you read the story in the paper about the scooter rack built for the local school. “People come to the shed with their own skills and they share them. Everyone has the opportunity to socialise and learn something new, and the community benefits” – Patrick Abrahams, Chair of Frome Shed.

It’s clear that the Men’s Shed provides a much-needed sense of belonging to all who attend and to some it’s a lifeline. Patrick added “Some people have little else to bring them out of the house” 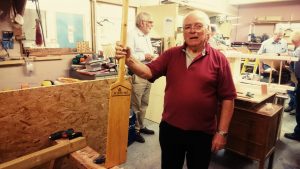 The name was born from the original aim – to tackle a societal problem which typically affects men. However, anyone over the age of 18 is welcome, male or female. Tony (right) describes a sense of isolation felt by many men, who unlike women are often discouraged from seeking emotional support. Tony came to Frome Men’s Shed six months ago after losing his wife. Aged 76 he said ‘socialising becomes difficult when you get older. You start to lose the people close to you, friends and family. There’s less community spirit with your neighbours. Men aren’t encouraged to sit and talk to each other, we’ve only got the pub or the shed”

Another Shedder, Steve Gray said “Men have got an image to uphold. This is a male bonding thing. Most men won’t admit to it – but we need things like this.”

Frome Men’s Shed has over 70 members and it’s still growing. It is open every Thursday 9am – 1pm at the Welshmill Hub. If you think it might be for you, pop in to discover the opportunities or call 07932-760585.

Come and see Glennis in action in the Country Pursuits area at the Cheese Show this Saturday.

Click here to find out more about Frome Men’s Shed.

More about the coracles here