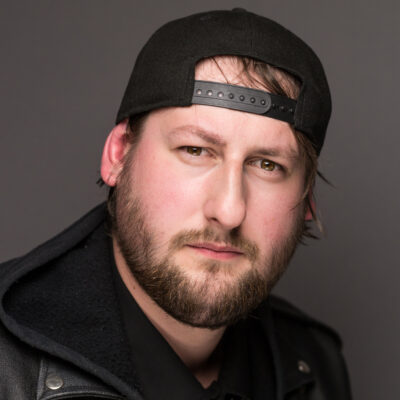 Born and bred here in Frome and named after the devastating hurricane Andrew of 1992. Andy did all his schooling here, starting in Hayesdown then Selwood before finally progressing to Frome College. While in Frome college he was very active in the media department until his love of music took over, he was a lance corporal in the army cadets and began his drumming career in the “silver bugles” cadet band playing the snare drum. After leaving Frome College he enrolled in Bath college spontaneously and on a whim and enjoyed 4 years there.

Andy has hosted a handful of shows on Frome FM, most notably ‘Velocity Rock’ which was syndicated to numerous other stations around the world. He has played in various Rock/Hardcore Punk acts and have been fortune enough to tour the UK, Europe and America doing so and have enjoyed being in one of a select few bands from the genre supported by the BBC.

He has cultivated great friendships, acquaintances and networks through his time working with the public in the town centre (Westway Co-op) and in 2018 took the decision to explore local politics, run for election to become a town councillor and help nurture the town that has provided me with so much encouragement and many great opportunities.