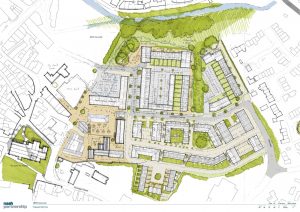 The Council Meeting started with a welcome from the Chair, Mayor Rich Ackroyd, to a packed room full of local residents and Cllrs.

First on the agenda was the discussion about plans to redevelop the land at Saxonvale. Acorn Property Group and their architects Nash Partnership kicked off with the latest version of their masterplan. They said the feedback they’ve had from the public and FTC has influenced the latest version.

One of the major areas of concern for councillors was that there should be at least 30% of the residential stock for affordable housing and increase the allocation for commercial use. Some councillors also highlighted the apparent lack of retail space.

Acorn and Nash responded that they would try to reach 30% affordable housing, and that the latest version of the masterplan now allocated the whole of the Western Warehouse for commercial use. The plan was also to include some retail allocation. They also confirmed a new footbridge over the river would now feature in the outline planning application.

In response to concerns that the four-storey residential development would over look people living in Rivers Reach, the architects said that they would address this.

Councillors asked about car, cycle and pedestrian access to the site and car parking for visitors. Acorn and Nash agreed to take a look at these areas.

After a good discussion, Rich Ackroyd then asked Cllrs to vote on the proposed response to the draft masterplan here, which they agreed. Rich thanked Acorn and Nash and the public for attending and contributing to the discussion.Jane Llewellyn, Planning & Development Manager then set out the progress of the Mendip Local Plan Part II. The purpose of the plan is to identify and allocate additional sites for housing, employment and local green spaces and to update local policies where relevant.

In response to representations received, amendments were made by MDC to the draft and the plan was then submitted to the Planning Inspectorate for independent examination on 23rd January. This will involve a public hearing which is anticipated to start in July 2019. For details take a look here. 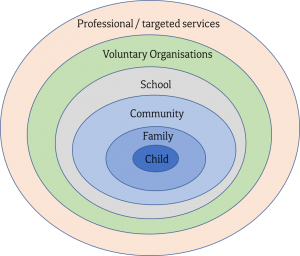 Next up was Kate Hellard, Community Projects Manager, who proposed the recruit a Children and Young People’s Project Officer. She highlighted that this had come about following various discussions in response to rising concerns expressed by professionals, parents, other community members and councillors regarding county council cuts and declining opportunities to access both universal and specialist services for children, young people and their families.

The role would reflect FTC’s way of working which is, wherever possible, to nurture skills and assets already held in the community and to continue to empower and support residents and organisations. Ultimately, helping to build more resilient communities. Cllrs welcomed the proposal and agreed to appoint the member of staff for two years instead of the original recommendation of one year. You can read the report here.Rich then said that Cllrs would now have to consider whether to sell the FTC land at Saxonvale in private session. Mel Usher noted that this was unfortunate but some of the parties involved in the sale had insisted on confidentiality. Rich noted that the details of the sale would be made public as soon as possible.The next Council meeting will be the first following the town council elections in May on 15 May.Follow us on Facebook, Twitter and Instagram to keep updated on everything we’re up to.