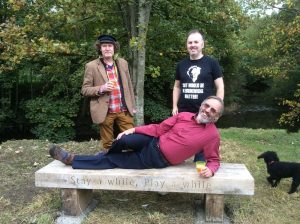 Two new solid oak benches were welcomed into Rodden Meadow last Sunday (18 October). Frome Town Council held a competition earlier in the year, asking people to create sloguns that could be carved onto the benches.

The entries to the competition were really varied and Peter Macfadyen, who was Mayor at the time, was asked to judge them and choose two winners. The entries were all given to him without the authors’ names so that he could be objective. He chose two, which would have the best longevity and be meaningful to anyone choosing to visit Rodden Meadow, whether residents or tourists.

The two winners were:

John Payne for “Stay a while, Play a While” and

Tim O’Connor for “Sit and watch the world go by”

The lettering was carved into the benches as a generous favour from Frome’s own master carver, Charlie Oldham.

Deputy Mayor, Alison Barclay, formally thanked everyone involved on Sunday, saying “These benches are a beautiful addition to the meadow and a great example of members of the community coming together on a lovely project that benefits everyone”. She invited the assembled crowd to toast both the winners and the carver with a glass of local cider or apple juice. John Payne also made a speech and recited a poem that he has written specifically about Rodden Meadow and that he said was particularly apt since that morning he had seen a kingfisher for the first time in his 30 years of living in Frome!

The town Rangers have cleared the brambles and scrub from the river bank where the two new benches are sited and this has opened up views to the river, making this a delightful and relaxing picnic spot. If you haven’t ever visited Rodden Meadow, it is well worth the short walk either along Willow Vale or from the footpath at the junction of Portway and New Road!