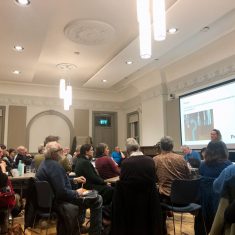 Last Wednesday saw the film of the firework night on the 3rd November kick off the council meeting.  Andrew Lee, who led the project on behalf of Frome Rotary Clubs said it was a great success: over £5k for good causes in the town. Councillors agreed the event was successful and brought many parts of the community together. Rich Ackroyd, The Mayor thanked Andrew and the Rotary Clubs for their work and then went on to thank everyone who was involved in an extremely successful Christmas light switch on.

The Mayor then told everyone about the anti-bullying rally that took place last month which came from one student’s suggestion and spread to 11 schools. It was commented that it was great to see Frome Town Council putting this idea into action and the connections made between all the local children. You can watch the video, which got a round of applause from the room, here.

The next much-anticipated item to be discussed, was whether to declare a climate emergency. Anna Francis, Resilience Manager, explained that a UN report has made it clear that the world has less than 12 years to switch away from fossil fuels and avoid the worst impacts of climate change. David Attenborough has also recently added his voice saying civilisation is on the brink of collapse.

Anna shared a number of shocking statistics and graphs which showed the very real impact of climate change, as well as outlining what it means for Frome. She ended by saying there are so many economic, social and environmental reasons to go ahead and asked the room to discuss what steps we could take to reduce the impact of a climate emergency.

Responses ranged from investing heavily in solar panel to ensure all parts of the community are engaged as we move forward. Councillors unanimously agreed to declare a climate emergency and commit to going carbon neutral by 2030. Doing this will help to increase energy security, improve air quality, minimise fuel poverty and can boost the local economy as well as providing jobs and training. Importantly it will raise the profile of this vital issue and hopefully force government into action.

By signing up to the Covenant of Mayors, Frome Town Council will be able to track progress and link with towns around the world who are cutting emissions. You can read the report here.

Environment Manager, Chris Stringer then presented a report on Egford Lane play area and green space after 28 residents asked Frome Town Council to take on responsibility for the area in place of Mendip District Council. The potential transfer is being led by the local community and has been prompted by FTC’s successful track record in taking on and managing open spaces in the town. With this in mind Councillors quickly agreed to the recommendations and to start discussions with Mendip District Council. Take a look at the report here.

Dave Clark spoke about the SCC cuts, particularly the possible threat to the Key Centre. John Clarke (SCC Councillor) was concerned too and on behalf of his fellow SCC Councillor Martin Dimmery, said that they were working to reduce the impacts but as far as they knew the Key Centre wasn’t under threat of closure.

Toby Eliot said that the impacts of the cuts in Frome is the same across the country and a direct result of national policy of austerity. He also noted that FTC had concerns about double taxation if FTC raised the precept to fill the gaps left by the SCC cuts.

Mel Usher said that it was unlikely that the cuts would be reversed and that, as a community, we should continue to build resilience so that we can reduce reliance on discretionary services from the public sector.  The Mayor, Rich Ackroyd, said that FTC was also very worried about the impacts of the cuts and would be writing to the Leader of SCC urging him to reverse the proposal. Rich also said that he would like to know for sure whether they Key Centre was under threat.

The details of everything mentioned above can be found at www.frometowncouncil.gov.uk and the next Council meeting will be in the new year on 23 January 2019. Follow us on Facebook, Twitter and Instagram to keep updated on everything we’re up to.