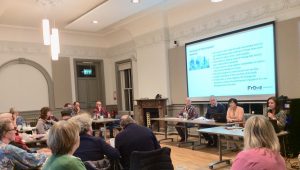 Yesterday’s Council Meeting started with a warm greeting from Mayor Richard Ackroyd who was out of the saddle and back in the Chair after his month away cycling from Lands End to John O’Groats.

He began by saying he had just enjoyed a celebration with Somerset Skills and Leaning for their 10-year anniversary of being in Frome. He then asked if there were any questions or comments from the public and Councillors to which Mark Cllr Mark Dorrington thanked the Cllrs who attended the Mendip District Council meeting regarding the implementation of Sunday charges. Sadly, despite the Cllrs best efforts and the towns petition this will be going ahead.

Mendip District Councillor Shane Collins mentioned that the ‘Rising Up’ workshop at Frome Town Hall on 27 September, which addressed the impacts of climate change, was the most successful event the organisers have had so far.

Jane Llewellyn, Planning and Development Manager then introduced the suggestion from Frome Town Council to work with University of the west of England (UWE) to create a study to influence any potential housing developments in Frome such as Selwood Garden Village and Saxonvale.

The idea was developed when earlier this year a proposal was submitted to develop land south of the town as a new ‘garden village’. FTC felt it was vital to take account of future needs of the town and engage the local community when responding to any plans. As part of this, UWE have offered their support to complete a research project that will be carried out by Master of Architecture Students supported by researchers and tutors worth £10,000. They will study the environment to identify what residents of Frome value about the town as a place to live, work and play.

The suggestion was discussed between Cllrs and members of the public, some were concerned that this would serve as an endorsement of any potential development plans for Selwood but it was assured that this was not the case. Everyone was generally positive about the idea as a way of helping to influence any plans going forward. The recommendation of £3,000 from FTC to go ahead with the research project was agreed.

Town Clerk, Paul Wynne then gave a presentation on behalf of Chris Stringer, Environment Manager about the current resurfacing works that have been taking place across the town. So far, Welshmill play park equipment has been repaired and rejuvenated, the skatepark at Mary Baily Playing Field has been resurfaced, new paths have been put in on the Old Showfield and the entrance of Victoria Park has been resurfaced.

The feedback has been overwhelming positive with local residents delighted by having improved surfaces and equipment in Frome’s Green spaces. After exploring the costs which have been significantly cheaper than expected, it was recommended that FTC resurface the rest of the circular path at Victoria Park and was unanimously agreed.

It was then time for Councillor Shelia Gore to update everyone on the Joint Committee for the Boyle Cross which has been developed as a way to encourage more activity on the new event space and ensure that it is well managed. The Joint Committee is between FTC and Mendip District Council who own the area. It is intended to make it as easy as possible for local people to use the area for events and activities. A discussion then followed regarding the agreement and what it would mean for FTC, it was decided to note the draft agreement with some work still to be done in the detail.

The end of the meeting was the approval of the continued appointment of the Internal Auditor, the adoption of the Complaints Policy and Procedure and the Volunteer Policy. A staff item was discussed in a private session.

The details of everything mentioned above can be found at here and the next Council meeting will be on 5 December. Follow us on Facebook, Twitter and Instagram to keep updated on everything we’re up to.