February’s Council Matters meeting on Wednesday 26th February started with a welcome from Chair, Cllr Shelia Gore and quickly moved into questions and comments from the public and Cllrs. 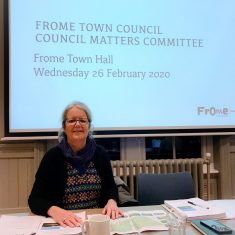 First on the agenda Chris Stringer, Frome Town Council’s (FTC) Environment Manager, opened discussions on the possible acquisition of an open space near Broadway.  Having been approached by a group of residents, who have collectively formed the Broadway Allotments and Community Garden Association,  they are asking for FTC to take on the responsibility for the management and upkeep of an open space off Broadway  which has been largely neglected for a number of years and is currently owned by Mendip District Council (MDC).

John Clarke, who spoke on behalf of the group, went onto explain how their proposals for this space will not only provide an accessible green area but also protect the current wildlife (there is potentially the last urban badger set on this piece of land) and will increase the biodiversity of the area. Their aim is to also use this area as a community growing space and that the Town Rangers would work collaboratively with the group to encourage community stewardship. The Cllrs approved for the Lead Ranger to carry on conversations with the local community group and that Chris would continue talks with Mendip regarding the possibility of taking on the freehold of the land, this will be reported back at a future Council Matters meeting. You can read Chris’s report here.

Following this, Chris gave an update on the floodlights at the Mary Baily playing field. Selwood Tennis Club want to pursue funding and planning applications, as FTC look after the playing field, the club will need approved support. We heard how the club has other sports groups interested in using the courts for other activities, e.g. Netball, so this project will benefit a wider community. Cllrs unanimously approved, Chris will carry on discussions with the tennis club and report back at the appropriate Council meeting.   Read the report here.

Rachel Griffin, Marketing and Communications Manager at FTC, led an interactive session for the next item on the agenda.  The Communications Strategy is reviewed to ensure it’s in line with the overall FTC strategy.  Rachel asked groups at the meeting to look at what we are communicating and to who via what channels.  The feedback gained tonight will be collated into Rachel’s 2020 strategy review and will be presented to Cllrs at a future meeting. You can read her report here.

Next up Hannah Paniccia, Finance Administrator, provided an update on the finances of the Town Council.  It included the Income and Expenditure report to 31 January 2020, the current balance sheet, a list of spending on items over £500, status of reserves, and a year end forecast to March 2020.  You can read Hannah’s full report here.

Chris Stringer returned to the floor for the following item, which discussed improving the toilets at Victoria Park.  Chris’s report suggested a new direction for this ongoing project, and rather than build new facilities which could have bigger financial and environmental impacts, FTC should look to improve the existing toilets building instead.  The Cllrs agreed to designing and costing the refurbishments. The full report with details is here.

Chris continued with the next agenda item, by providing an update on our parks and open spaces and it showed just how much has been happening in Frome’s great outdoors. It included information on work that has been recently completed: Wild about trees planting days, new gates for the play area at the Old Showfield, Ranger Dave being appointed as the new Lead Ranger.  Then ongoing projects: Ranger recruitment, discussions with MDC about Egford Lane and the old allotments off Broadway, discussions with Somerset County Council regarding the speed indicator device and thinking about a new design for the low fence that runs along Chateau- Gontier walk. And finally, what’s coming soon such as appointing a new Wild about Trees Project Officer, the start of the grass cutting season and improving drainage at the Old Showfield and in Mary Baily & Victoria Park. Full details are here.

Rachel was next up again and gave an update on the Town Hall. The news was all positive with feedback and statistics showing that the building is a vibrant and well-used community facility for a variety of interesting organisations and events during the week. Rachel also announced that the Town Hall has been granted a licence to allow for registry wedding/civil partnerships ceremonies, which will help carry this vibrancy into the weekends.  Read her report here.

Finally, there was a small amendment to the Frome Twinning Association partnership with FTC, also reports on Health & Safety, and a staff update. You can read all the reports here.

The details of everything mentioned above can be found at www.frometowncouncil.gov.uk and the next meeting is Council on Wednesday 6th May. Follow us on Facebook, Twitter and Instagram to keep updated on everything we’re up to.