A full agenda meant for a busy and well-attended Annual Council meeting last night – so thank you to everyone who came along. 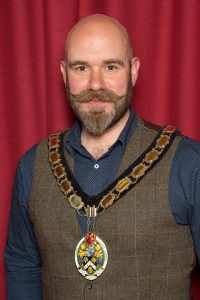 Cllr Toby Eliot was elected Mayor of Frome Town Council and the Mayoral chain was passed to him by the outgoing Mayor, Kate Bielby.

Toby thanked his fellow Cllrs for electing him and said, “I’m going to make my year as Mayor about opening up the town council and allowing everyone to play a part. My hope is that this will be foundation of participation that can be built on in future years here in Frome.” 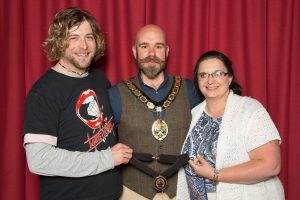 In a first for Frome, two Cllrs were elected Deputy Mayors – Cath Puddick and Al O’Kane. In a similar vein, Pippa Goldfinger was elected deputy Leader of the Council, while Mel Usher became the Leader.

Cllrs also agreed to establish two new committees – the Town Matters and the Council Co-ordination Committee and agreed a timetable of meetings for the year ahead which can be found on our website.

Toby, who was born and brought up in Bath now lives in Frome with wife Rosie, eldest son Henry, and youngest son Jasper. Toby works for a local authority and is responsible for managing performance, risk and strategic planning and has a professional interest in how the public sector works and improves.  He was first elected to Frome Town Council in 2011 in the Keyford ward and again in 2015 – this time in Oakfield.