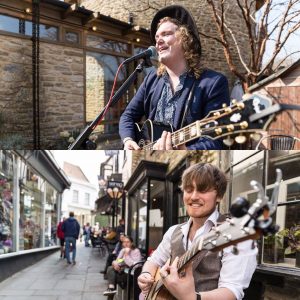 Frome’s streets were buzzing with activity on Saturday 30 March as musical acts, all under the age of 25, took over the town centre with guitars and microphones ready to wow the crowds.

This is the second year that Frome Town Council has organised the popular event to showcase the real talent of local young people as well as some of the town’s favourite spots including the Black Swan Arts, Boyle Cross, Catherine Street, Cheap Street and King Street.

The performers ranged from a folk music duo the young Wolf Sisters, to singer/songwriters Ben Hutcheson, James Harriman and Benjamin Hardy-Philips who played a mix of well-known tunes and their own pieces. Ollie Neilson played the classical guitar with a competency way beyond his years; Clare Krige performed to an audience for the very first time with a beautiful voice and Jake McGregor pulled out some firm favorites that really played to the audience.

All showed their passion for music and their craft, which made it a very difficult decision for the judges: musician and Frome town councillor Al O’Kane, bass player for The The James Eller, and drummer Chris Whitten who has toured with Paul McCartney and Dire Straits.

They were so impressed they ended up awarding two of the artists, Ben Hutcheson and James Harriman, joint 1st place. The lucky winners will be supporting Ben Ottewell at Rook Lane and performing at Sunrise festival this year respectively. They selected Benjamin Hardy-Philips as well-deserved runner up who has secured the chance to record in the Bert Jansch Studio at the Cheese & Grain.

To find out more about the acts go to www.frometowncouncil.gov.uk/fromebusks and to see photos from the day taken by Chris Bailey take a look at www.discoverfrome.co.uk/gallery/.