This year’s Frome Christmas Light Switch on saw a dramatic and fantastic display of lanterns once again and it is estimated that more people took part in the procession this year than were in the audience. A packed Frome saw the lantern parade, the lights go on and were entertained by the Samba band, Frome Town Band and Rock Choir to name a few. 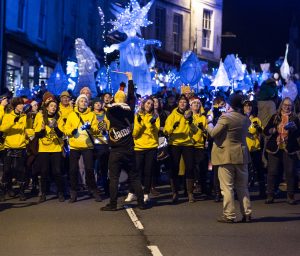 The George Hotel once again allowed the town to take it over for the evening as it played host the Christmas Light Switch on.  On the balcony this year joining Mayor Mark Dorrington were representatives of Frome’s Past and Frome’s Future.  Steve Frances worked in one of this town’s most industrious and world-renowned metal works, J.W Singer’s, for fifty years and graced the balcony with Sue Bucklow.

The story goes that as Singer’s closed its doors on the town centre site at Waterloo, Steve rescued over 3000 glass negatives which dated back over 150 years of heritage.  These showed all the amazing sculptures and statues which have left Frome with the most amazing industrial archive and have helped celebrate Singer’s bicentenary year with the Casting the World exhibition.

The fantastic lanterns in the parade were made in workshops with Mel Day and Aliss Vaas from Frome Light the Night and this time had taken inspiration from the Singers statues.  There were community workshops, angels made by pupils at Oakfield and Selwood schools, and Boudica who led the way.

The Mayor’s Christmas card competition winner this year was Heidi Robinson and the runner up Lucas Ashby and his family also took part in switching on the lights. The competition asked children to think not only about Christmas but also about the future of the planet and over 496 children took part in workshops delivered in Frome schools.

Other entertainment included Cheryl from Mojo Moves bringing her own brand of comedy aerobics, and the Frome Town Band for magnificent and rousing carols. Thanks also to singers Jo Hanstead, Helen Deeming, Ba Pardhy with Songbirds and Frome Community Choir for leading the way with the carols.

The new addition to our Christmas light switch on this year was a fantastic grotto for Frome for you know who! Made from Stormboard, a recycled plastic more usually made into emergency shelters and made up of water pipe off-cuts, gas pipe off-cuts, wire strippings and Frome residents’ bottle top collections! So, thank you so much to Protomax for their generous donation and all their hard work.

Father Christmas raised money for the Toy Library and will continue to be in residence on Late Night shopping Thursdays throughout December.

Our thanks also go to Lawrence Fairfield, who are responsible for the lights going on, Id Verde for popping on the lid of the grotto and for clearing up after the event, CH Contracting for making sure all the pre-event signs went around; Frome Football Club for letting us store barriers on their grounds;  and of course, the Police for help in planning a safe event.

Casting the World project was a Heritage Lottery funded project. For further information go to https://www.rooklanearts.org.uk/castingtheworld/. Frome Light the Night were commissioned by Frome Town Council to deliver the lantern parade workshops.