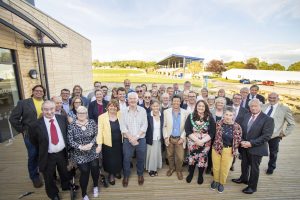 Cllr Ros Wyke takes over as Leader, supported by Deputy Leader Cllr Janine Nash and thecabinet, which is a mix of former and newly elected councillors. Cllr Helen Sprawson-White takes on the role of Chair with Cllr Bente Height supporting as Deputy Chair.

In her opening speech as Leader of Mendip District Council, Cllr Ros Wyke, said; “The opportunity to address this council, this new council, as leader of the largest group and leader of Mendip is a great privilege and responsibility.

“I lead a group of people who are younger, more diverse and I am proud to say, more gender balanced than ever before. It’s my strongly held belief that when we bring people with different views and life experiences together to make decisions, we achieve better results for the people we are here to represent.”

Remarking on collaboration and the council working across party boundaries to achieve positive change for Mendip’s residents and communities, Cllr Wyke, said; “Just as for the suffragettes – deeds, not words, must be our motto.”

In her closing comments Cllr Wyke mentioned all the those that the council is there to serve, from the shopkeepers and market traders in England’s smallest city – Wells, the market towns of Frome, Glastonbury, Shepton Mallet and the village of Street, to the farmers and residents of the many rural communities.

Cllr Wyke, said; “We councillors are all amazingly proud to represent this beautiful part of our ancient County of Somerset.

“As we move forward, approaching our work for Mendip, we should try to forget what divides us politically, and remember the people who put us here. We’re public servants to the citizens of Mendip, and it’s in that spirit that our work begins tonight.”

Following her election by council as Chair, Cllr Helen Sprawson-White, set out her plans to focus on health and education during her time as Chair. Cllr Sprawson-White, said; “As Chair I believe it is important that we send a clear message to our communities that we are an authority that is approachable, transparent and inclusive. I want all residents, members and officers to feel a real sense of pride and belonging to Mendip, working together to deliver effective outcomes and I will do all I can to break down any barriers that are in place to make this happen.”

The new Cabinet announced at Full Council was as follows:

The council’s committee structure and chairs and vice chairs will be as follows:

Published
21 May 2019
Last Updated
19 January 2021
Published in
News
Previous
Could you host young people or adults from our twin towns?
Next
Tailored training for trustees to get to grips with governance
Report
Report an accessibility problem