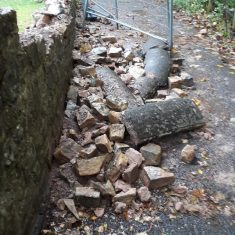 A spate of vandalism in Frome’s parks and green spaces has resulted in the Town Rangers spending much of their time carrying out additional fixing, tidying up and making the areas safe.

Lead Ranger, Dave Krzyzosiak said: “We’ve come in after the past two weekends to find damage in Victoria Park, Welshmill, Rodden Meadow and the Old Showfield.”

Dave added: “It’s really frustrating – and a bit disheartening. We love the town; and we love looking after our spaces for all of Frome to enjoy. Repairing because of day to day wear is obviously part of the job; but just now we’re having to fix things that people are vandalising. And we’d much rather be spending our time on projects that improve the parks, like planting around the bandstand.”

The vandalism has included a ‘Wild about Sharing’ box that was completely burnt out at the Showfield. The stone wall by the pump track at Welshmill has been damaged on three separate nights in the last week alone; with sections of the wall pushed over onto the footpath leading to and from the town centre.

“Whilst we realise that this sort of vandalism happens rarely, these actions just spoil the town for everyone” said Cllr Steve Tanner, who represents the Innox Ward. “As a Council, we’d much rather be spending our time and money elsewhere, making things better and supporting communities to do the same.”

The Police have reiterated that if anybody witnesses any vandalism to ring 101 or 999, depending on circumstances to make sure it is reported.