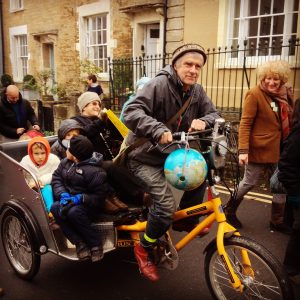 Frome is joining thousands of cities and towns around the world in holding a rally to demonstrate how the tide has turned in the race against climate change, to showcase climate action taking place around the world, and to inspire commitments from each other and from national governments. The three events that are taking place include a rally, a work shop around actions and an evening with the accidental anarchist Carne Ross.

The Rally on the 8th September begins at midday at the Boyle Cross in Frome. People are asked to bring banners, bikes and something to make noise with. Groups ranging from the National Trust to Somerset Wildlife to FROGs are being invited to participate and support the call for a switch away from fossil fuels.

One of the actions that Frome Town Council are asking for is that residents sign up to pledge to a series of actions.  Frome Town Councillor Peter Macfadyen said “The pledge cards are a series of actions that all of us can take that make a real difference. Switching to a green energy supplier such as Good Energy or Ecotricity for example means that the money we spend on energy goes directly to support renewables such as solar and wind. Switching to a bank that doesn’t invest in fracking or oil is also important. Even pledging – and then doing – just one of these actions make seem like a drop in the ocean but collectively will make a difference.”

Co-organiser Alex Hart from Sustainable Frome says “I’ve been kicked into action to ‘Rise up’ on the 8th by Pope Francis who calls for ‘citizens’ pressure groups’ to make some noise ahead of the Global Climate Action Summit and ensure it provides ‘suitable responses’ to the climate crisis. He said that climate change is a challenge of “epochal proportions” and that the world must convert to clean fuel – “Civilisation requires energy, but energy use must not destroy civilisation.”

The rally is followed later in the month by a free ‘Rising Up’ workshop at Frome Town Hall on 27th September at 7pm. Speaker Roger Hallam will outline the impacts of climate change and what actions we can take to enable the switch away from fossil fuels. Roger said, “The science is done – we are heading for climate catastrophe in the next decade and face the prospect of extinction if governments don’t change course very fast. It’s real, it’s happening – we need to act. Come and hear the facts and the plans and how to get involved.” Roger previously persuaded Kings College to divest from fossil fuels through actions including a hunger strike.

The final uprising event will take place on 5th October at 7pm at Rye Bakery where ex-foreign diplomat Carne Ross will come to Frome to explore alternatives to our current system which value people above profit.’ Carne makes the case that our current political system places decision-making in the wrong hands. Writing about his BBC documentary ‘Accidental Anarchist’ Carne Ross said ‘In northern Syria we witnessed the extraordinary attempt at bottom-up self-government in Rojava. It was here I realised that anarchist society, where people govern themselves without hierarchy, authority, or state, is possible.” This applies to energy where the government supporting fracking instead of renewables.

For more info or book a ticket to the above event visit: www.sustainablefrome.org.uk

Published
25 August 2018
Last Updated
19 January 2021
Published in
News
Previous
Long Lost Pathway Reopens in Frome
Next
Frome Business Breakfast – How Can Businesses Give Back to the Town?
Report
Report an accessibility problem