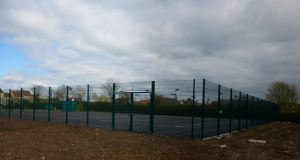 This event has been delayed.

The new tennis courts on the Mary Baily Playing Field are set to open this May, with a celebratory event being planned for Saturday 28 May. This official opening event will feature free tennis all day; an inaugural mini-tournament, including a ‘Councillors vs Club match’ – as well as free advice and coaching.

Work on the new courts started in December after Frome Selwood Tennis Club and Frome Town Council successfully applied for nearly £100,000 of funding from Sport England and the Lawn Tennis Association.  Chris Stringer, our Environment  Manager comments “The courts still need to be painted – and alongside this, there are landscaping works set for both Mary Baily and Victoria Park. These works have been scheduled for early next month because they require dry conditions and slightly warmer weather, but as soon as this is done we’ll have the courts open – and then we’re planning to have the official opening event. With all of the essential construction works now complete, we foresee the courts will be open in time for the school summer holidays and Wimbledon.”

The courts will cost £5 per court per hour to hire; and can be booked online at www.frometennis.net or in person by calling in to the library.

“We’re absolutely delighted” said John Price, Chair of the tennis club. “We’ve been able to work in partnership with the Town Council to deliver three brand new courts for Frome.”

In conjunction with the tennis club, the Council has also organised for the courts to be open for free at times during June, July and August. Throughout these months, all three courts on Mary Baily will be available for people to play for free between 4pm and 6pm on Fridays; and between 3pm and 6pm on Saturdays and Sundays. “We’ll even supply the rackets and balls!” said John.

The tennis club will also be keeping an eye on the weather this first summer. “In the event of warm weather the courts may need to be temporarily closed at times” said John. “We realise that this is probably going to be both disappointing and frustrating, but during the first year of any new court the surface can become a bit soft and sticky as the oils settle. ‘Softening’ can occur during the first summer of use – and on days where the temperature exceeds 25°C for a significant period. And it’s important that we look out for this so we can ensure the courts are given time to fully settle; that way they should last the full 10 to 12 years we’re expecting, after which we’re planning to resurface them again” explained John.

The tennis club will also be organising events during the year, and the club is still hoping to arrange for the Davis Cup to come to Frome later in the summer. To keep up-to-date with these events look out for notices on the courts and on the club’s website. Alternatively sign up to the Town Council’s regular email updates by emailing your details to: admin@frometowncouncil.gov.uk or calling 01373 465757.

For more information about the courts and tennis offering please see contact details below:

Chris Stringer on 01373 465757 or at stringerc@frometowncouncil.gov.uk

Frome Selwood Tennis Club, John Price on 07713 737890 or at chairman@frometennis.net