A number of major charities in the UK have reported a spike in the calls and emails from people wanting to know how they can help with the Syrian refugee Calais crisis. Frome Town Council has donated a depot to local residents who have launched a campaign for donations of clothing, food, and other essential items for refugees in Calais.

Justine Corrie started the campaign in response to the images being broadcast around the world following the crisis. There are now a number of people and groups collecting donations and coordinating events highlighting the crisis. If you would like to donate or get involved in local initiatives then please contact:

You can also visit the SHARE shop on the bridge in the town centre to speak with soemone about local initiatives.

We have been advised that the donation stations have reached capacity and so currently are not able to accept any further donations at this time. If this changes we will update our website and social channels. 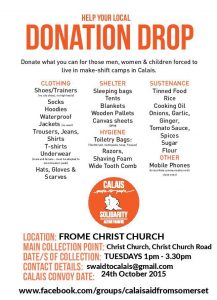 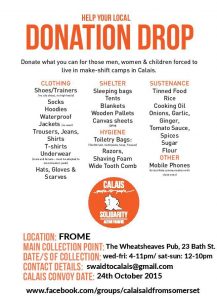