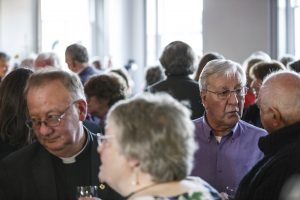 Frome Town Hall officially opened on Saturday (1 April 2017) and saw a stream of visitors curious to see what the new inhabitants had done to the building.  The tenants and Frome Town Council held an open day for the public to have a look around the building including the grand Council Chamber.

Hundreds of people joined in the activities on the day.  Councillors and Council staff were on hand to show people around the historic building and answer any questions.  Children were entertained by taking turns on the peddled powered smoothie bike, assisted by Cara Naden, the Resilience officer, and Ranger Mike, a keen cyclist, and of course by drinking the delicious smoothies.

Frome FM, Fair Frome, WHY, and Active and in Touch as well as Volunteer Frome, Frome Community Cars and Frome Missing Link were also on hand to welcome visitors to the building and talk about the work that they do for the town.

Painted People provided face painting that proved to be very popular and Councillor Cath Puddick assisted children throughout the afternoon in having a turn at using the official town seal. 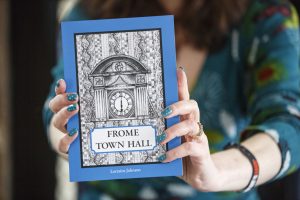 There was also an opportunity to view and buy the book especially commissioned for the occasion, Frome Town Hall.  Lorraine Johnson, local historian and the author of the book, was signing copies and talking to people who remembered working in the building.  Councillor Sheila Gore was with her: “I got to chat to lots of people including the son of the last caretaker and social workers who had worked in the rooms recently and they couldn’t believe the changes… great conversations.”

Frome Heritage Museum had donated some of the images from the book to help form the first display on the new exhibition boards.  Organisations, artists and community groups are now invited to come forward to exhibit their own displays.

Chris Stringer, Environment Manager, was on hand to answer people’s questions about outside spaces and to talk about whether new toilets were needed in Victoria Park and, if so, what they should be like. He said: “It was great to see some many people from the town in the building – it’s exactly the reason we bought the Town Hall!  There was lots of interest in the toilets in the park and the options that are available – and over 150 people voted on the day. There’s still plenty of time to vote – and to find out everything you need to know by heading to the FTC website or calling in to the Town Hall.” 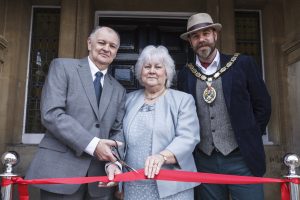 Asked about the balloons in the garden for the day he said: “Plans are being drawn up for the front of the building at the moment, so watch this space!”

Young musicians were invited to provide live music for the evening reception.  Jacob Yeo, Solo Candy, Ruby Plaxton & Carl & Rose took to the stage and delighted the assembled guests. Carl Bourditch said of the Town Hall’: “It was great to be asked to play and to be one of the first to use the new in-house sound system. From a musician’s point of view the acoustics were good and the system sounded great!”

Toby Eliot, Mayor of Frome said “More than anything else, this building belongs to the community and I want to encourage as many people as possible to think of it as theirs and to use it. Everyone is welcome.”

Mr and Mrs Wheeler, pictured here with the Mayor Toby Eliot, cut the ribbon at 2pm on the steps of the Town Hall in a ceremony evoking their own wedding photo.  The couple who married in building in 1965, and who still live in Frome, where delighted to be asked and later also bought the Council Chamber to order at the official reception by bringing the gavel down. They were delighted to hear that weddings will once again soon be performed here. 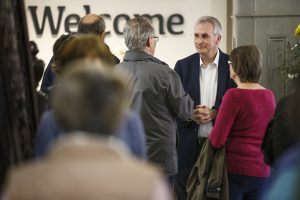 Paul Wynne, Frome Town Clerk said: “It was great to be able to welcome so many into the building.  We hope that this will be merely a continuation of the relationship that the people of Frome already have with this building.  Please come in, use the space, ask us questions, feel at home and use the loo if you need to.”

Hot desks, meeting rooms and the Council Chamber are now available for hire. Please get in touch on 01373 465757, admin@frometowncouncil.gov.uk or come in for a chat.

To vote on the toilets in Victoria Park click on https://www.frometowncouncil.gov.uk/voteonvictoriaparktoilets/