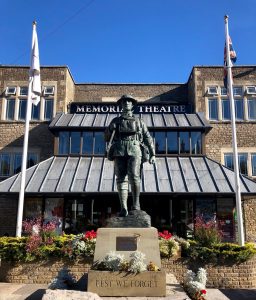 The Mayor of Frome Rich Ackroyd, shares his thoughts on Remembrance Day in the lead up to Frome observing the Annual Act of Remembrance, which falls this year exactly one hundred years to the moment Armistice was declared, at the eleventh hour on 11th November 1918.

Frome’s Remembrance Parade will start at 10.55am on Sunday 11th November at Frome War Memorial. The Town Council, armed forces groups and Veterans and representatives of organisations that serve our community will be welcomed as wreaths are laid to the memory of the fallen and those who Lived On, but who carry the scars in mind or body.

Besides the Remembrance Sunday parade and service many schools, arts organisations, churches, sports clubs and groups, in and around Frome will be making their own observance.  Please take time to visit and support any of the events which include:

From 1918 – Readjusting to Peace. An exhibition looking into the effects of the First World War on the local population before and after the armistice.

Perspex silhouettes will be in the Frome Memorial Theatre, Merlin Theatre, Black Swan Arts and local schools and churches, returning the fallen to the spaces they left behind.

Poppies, by knitting and embroidery groups and many, many of the public will adorn areas: Red for Remembrance, Blue for Animals Remembered and White for Peace.

At the Garden of Remembrance in the Frome Memorial Theatre foyer. Daily at 11am, a roll call of ten names, with a brief WW1 history of the day.

The Frome Ex-Armed forces groups, led by the Frome Royal Naval Association, will have a Garden of Remembrance in the Frome Memorial Theatre foyer. Crosses to the 224 men of Frome who fell will be on display.  Public welcome to lay crosses.

The “Somerset Poppy of Honour” will be in the front of the Frome Memorial Theatre.

An arts installation in the Round Tower:  Silhouettes will form around a personal poppy arts work by Michael Riggs. Pebbles painted in poppies made by Frome Scouts, will adorn the area in the distinctive Fleur de Lys formation.

The launch of  “Lest We Forget”, a story of life in Corsley and Chapmanslade during WW1, to commemorate the 100th anniversary of the Armistice Day ending WW1. An evening of music, songs, poetry and a resume of the war. Light refreshments and a bar.  Free entry with donations to the Royal British Legion.

Nunney Remembers Armistice Service, when those who lost their lives in the village will be recalled. Silhouettes will return the men to the space they left behind.

Holding a Service of Remembrance followed by Peal for Peace at 7.00pm. Silhouettes will return the men to the space they left behind.

A special Service of Remembrance attended by Mr David Warburton MP and the Mayor of Frome. Silhouettes will return the men to the space they left behind.

Commemorating the fallen and dedicating the addition of names to the memorial.

‘Who will come home?’ a concluding guided reflection in words and music by Rev’d Colin Alsbury.