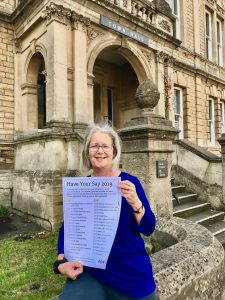 Frome residents are embracing Frome Town Council’s request for ideas for this year’s People’s Budget Town Vote. Nearly 40 suggestions have now been added, and many debates are taking place about the pros and cons of each one.

Ideas for projects should cost no more than £10,000, sit within the aims of the council, and be a deliverable project. So far, they include a splash pool, a talking bench, rewilding Frome, a shuttle bus, a water refill point and even a dog or litter warden.

Cllr Shelia Gore said, “If you’re ever left feeling like you are powerless to make a difference about something that matters to you, getting involved with this stage of the People’s Budget Vote really is an opportunity to be heard, not only by Frome Town Council but also by fellow residents. We hope people will be as creative as possible and think outside the box about what they would really like to see in their town.”

The Town Council are encouraging people to take a look at the ideas and start having conversations with each other via online platform Your Priorities. Alternatively, you can look at our Have your say 2019 ideas in the Frome Times, tick which ones you approve or disapprove of and return to the Town Hall or Discover Frome Information Point during opening hours.

People’s comments and the amount of likes and dislikes an idea gets will be then be taken into consideration by a shortlisting panel on 22 September. The group will be made up of local people who took part in ‘Have your say 2019’ and indicated they would like to be a part of the final shortlisting to decide which ideas to take forward.

Residents have until 9am on 18 September to look at the suggested projects and share their feedback. To find out more about how the People’s Budget Town Vote works and to add your idea into the running go to www.frometowncouncil.gov.uk/peoples-budget-town-vote